How to Using EM4 For Quails For Better Growht and Health

What can EM4 do for quail?

EM4 for quail can act as a probiotic. Due to the EM4 in it, there are several types of living microorganisms and are not non-pathogenic.

If these microorganisms can enter the digestive system of the quail, then they will work according to their duties.

The task or function of these microorganisms can be beneficial for the quail and the breeders.

This is because probiotics have been known for a long time to improve the performance of poultry production. Not only probiotics for laying hens and broilers, but also for quail.

Studies on the use of probiotics for laying hens and broilers have many references. It is not surprising, because both types of poultry are heavily influenced by government policies related to feed. 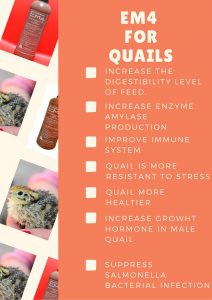 Apart from feed which is highly dependent on manufactured feed, now factory feed is not allowed to add antibiotics to their products.

This antibiotic is very helpful in stimulating the growth and production of both birds. Besides, this possibility is what makes homemade feeds and manufactured feeds differently. Better factory feed for quality.

But now it’s different. Antibiotics in factory feed are no longer allowed. So, enliven the probiotic is expected to be a substitute for antibiotics. It has long been known.

The quail farming business, which is not a big market share for feed producers, seems to have received less attention.

In-depth research and studies have not been done much for quail. Even if there were any, the bacterial strains used were expensive and difficult to handle.

It could be that, because EM4 is a commercial product, the experts do not want to do the endorsement indirectly. Namely by publishing the EM4 brand in their research results. Hmm … makes sense.

But either way, em4 is the cheapest option right now. It’s easy to find and almost every farm shop exists.

Also, em4 farms consist of bacteria and molds, which have very beneficial functions.

Some act as a suppressor of pathogenic bacteria, protein decomposers, and crude fiber decomposers.

Specifically, we will discuss it in the sub below.

We can compare the results of existing studies, by looking in detail at the types of microbes present in em4. 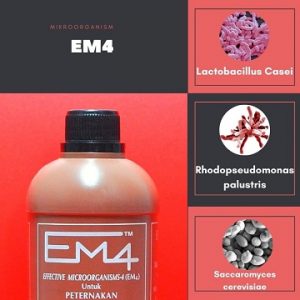 If we find a reference that specifically uses EM4, then we are lucky (Ya Hana Na).

We just need to understand it and apply it, if the results of these references turn out to be good.

However, if it is not specific to em4 farms, it should be looked at in more detail. The types of microbes used are included in Em4 or not.

Therefore, there is nothing wrong if we look in more detail at the content of microorganisms in these em4 farms.

Therefore, species usually have functions and workings that are almost similar. If they don’t work together, yes, they complement each other.

The three microorganisms on Em4 farms have almost the same density.

Lactobacillus casei is a bacteria that is naturally found in our urinary tract and mouth (humans). These bacteria can work in a very wide pH and temperature range. Can live in acidic or alkaline conditions.

These bacteria can produce an amylase enzyme. Enzymes are used in digesting carbohydrates. But it is not L. Casei’s job to digest it, but L. Acidophilus.

This means that L. Casei will provide more enzyme assistance to L. Acidophilus to break down sugars and produce lactic acid.

Well, this environment full of lactic acid can suppress the development of several pathogenic bacteria in quail digestion.

Therefore, the use of this lactobacillus species is very wide.

Most use in the dairy industry. An example of a product that uses L. Casei is Yakult.

This means that besides being used in animals (ruminants) and quails, one of the bacteria found in EM4 in animal husbandry is also widely used in human food. As a probiotic to be precise.

Naturally found in fruits. Usually, it is used in the winemaking and bread baking industry.

This is why the bread is often moldy. Not because it is contaminated by mold from outside. But indeed the manufacturing process uses mushrooms.

There may be a time limit to deactivate this mushroom. When the time came, the mushrooms rose and multiplied on the bread.

These molds can also be found in the parts of the human body. Such as the skin, oral cavity, and genitals of adult women.

In addition to bread, the specific benefits of this mold can be used for probiotics.

That is, when lactobacillus casei and saccharomyces cerevisiae together enter the digestive tract, it is possible that saccharomyces will not develop. Either it’s dead or it’s just the activity that’s not dominant.

This mold can take nitrogen from ammonia and urea and nitrogen sources in other forms except for nitrate.

With an aerobic work environment, this mold can be used to spray manure. Because mold will take advantage of urea and ammonium which cause the smell of feces.

However, S. cerevisiae mold does not produce protease enzymes. So, directly it cannot break down protein complexes into simpler ones.

As a single protein, S cerevisiae has a high protein content (in dry weight).

Its natural property is that it can degrade organic matter. It seems that these bacteria have a big role in composting.

Apart from composting, its ability to fix carbon dioxide can break down complex organic structures into simpler ones.

R. palustris can digest lignin which can make feed ingredients difficult to digest by livestock.

In the field of livestock, rations or feed will be easier to digest. In other words, the digestibility rate is higher.

R. palustris can live and develop aerobic and anaerobic.

How to give em4 to quail

I prefer to give EM4 to quail through drinking water. Because it is more practical and easier in the process. Just take the spet, take the appropriate amount of EM4, put it in the quail drinking water. 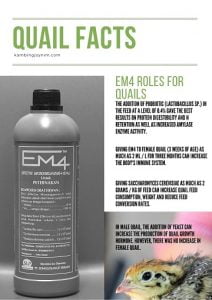 For em4 for ducks, yesterday the optimal dose was 3 ml / 1 liter of drinking water.

We will look at some of the other references. We’ll compare all of them later.

The addition of probiotics (Lactobacillus sp.) To feed at a level of 0.4% gives the best results on protein digestibility and N retention as well as increases the activity of amylase enzymes. [1]

Protein digestibility from the original 40.44% increased to 49.49%. Pretty much improvement.

Unfortunately, I did not find more detail with the amount of probiotic administration. When viewed from the method, it seems that the form of the probiotic is solid or powder, not liquid.

This means that for every 1 kg of quail ration, the probiotic given is 4 grams.

There are lactobacillus probiotics in powder form. I’ve seen it, if I’m not mistaken this probiotic is for fish.

But it doesn’t matter, as long as we know the contents, we can use it for any type of livestock.

Control quail (without probiotics) only produced eggs as much as 55.83%. Meanwhile, the quail gave the lactobacillus probiotic plus egg production was slightly higher to 58.04%. [2]

Then, studies that specifically used EM4 farms for quails, the results were also very positive. But this time to do with the health of the quail (immune system).

Giving EM4 to female quails (3 weeks of age) as much as 2 ml / l for three months can increase the body’s immune system of quails. [3]

The criteria for a good immune system of quail are characterized by the condition of hemoglobin, hematocrit, and total plasma protein.

The standard of the above parameter values ​​for normal quail is as follows:

Those were some studies using lactobacillus bacteria for quail. And the last one uses em4 exactly.

Now we look at some of the studies on the fungus Saccharomyces cerevisiae.

However, this time the research came from abroad. Because I didn’t find any journals that specifically discussed this yeast Saccharomyces cerevisiae for quails.

The results are also not much different from the use of Lactobacillus sp. This yeast can have a very positive effect on quail.

Among them is increasing the growth performance of quail and can suppress the attack of pathogenic bacteria.

Besides, Saccharomyces in feed can also increase the amount of quail blood insulin. Whether it’s male or female, both have an increase in the amount of insulin in their blood.

What’s more interesting is, in male quail, the addition of this yeast can increase the production of quail growth hormone. However, there was no increase in female quail.

In another study, with the same type of yeast, the results were almost the same. Namely decreased feed conversion, reduced mortality, and increased quail immunity.

In terms of reducing mortality, the administration of saccharomyces cerevisiae mold can effectively suppress infections caused by salmonella enteridis. [4]

So, Em4 Benefits for quail are

Although specifically Em4 farms for quails have not been studied much, all studies on the types of microorganisms are contained in EM4.

That is, by providing EM4 for quails, we will likely benefit from it all.

If we summarize again the results of the study above, then we will get em4 benefits for this quail as follows:

1. Increase the digestibility level of feed.

2. Increase the production of the enzyme amylase. Enzymes are used to break down sugar compounds.

3. Improve the immune system of the quail body.

7. Suppress disease due to Salmonella bacteria.

That’s the benefits we will get with Em4 for this quail.

I think it’s enough until here. Sorry … if there are many shortcomings. Thank you and see you later.