How to Treat Goat Lices

Goat lice are almost always present in every goat. What distinguishes it is the amount of population in goats.

The owner of the goat must pay attention to the health and hygiene of the goat from this parasitic insect. Although this one insect is small, but if their population is too much, they can harm the goat.

The goat louse is a member of the insect class. Like most insects, goat lice have heads, thoraxes that have 3 pairs of legs and abdomen.

The goat lice has an antenna but usually has no eyes. Hairworm ends have a claw-like structure that is used to hold hair or fur.

The goat louse is not winged. The goat louse is ectoparasite, which is a live goat lice on the surface of the skin of mammals or poultry. Goat lice have dimensions of about 1 mm – 10 mm. They do not like hot weather.

There are two types of ticks that usually goat on goats:

The first is kind of biting (biting louse) 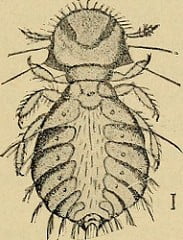 The head of the biting bug is large in size.

They have a mouth section adapted to chewing structures that are part of their diet such as hair, feathers, skin droppings, scabs, wax wool, and even their own eggs.

They do not really bite but some species are known to suck tissue fluid from their host.

This species lives on goats that have bacterial colonies in their digestive system cells that help them digest fur keratin.

Bite-type bugs, such as species that occur in goats and sheep, are thought to damage the hair by eating into the root part almost like tree felling.

These ticks prefer to stay at the base of the tail, between the legs, on the shoulders, head, neck and along the back, but can appear anywhere on the goat’s body. 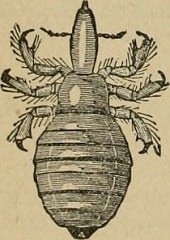 Lice that are sucked are part of an insect class called Anoplura.

There are about 300 species and they are only known as mammalian parasites.

This suck type of lice has a tapered head. The part on its mouth will be pulled to the head when it is not used to suck blood from its host.

Unlike type of biting louse, some species of sucking louse are known able to transmit the disease.

When the lice penetrate the skin, the saliva will be injected into the wound. As a result, it can prevent blood from clotting. In other words, the blood will be more fluid and difficult to stop even in very small amounts.

The reaction to this lice’s saliva can cause severe irritation.

The signs that often found in goats are goats will bite, scratch, anxiety, insomnia and appetite disorders.

If the population is very large, this lice can also cause anemia. This can happen because the goat will lose a lot of blood.

This lice will eat continuously.

As a result, the blood will much go out to the surface of goat skin because the blood is hard to freeze. Blood becomes more fluid as described above.

Then, the blood will dry on the surface of goat skin.

This can attract the attention of flies. If left unchecked, it can cause an infection that becomes even worse.

The entire life cycle of goat lice is done on the surface of the host’s skin. From egg to adult, the process occurs on goat or sheep skin.

Transmission of lice is only through direct body contact.

The female louse will attach its egg to the hair shaft with a glue-like substance. Then, nymphs hatch from eggs within a period of 1-2 weeks.

A week later, the first nymph will morpheme into the second nymph, then the third nymph until it becomes mature and reproduces again.

The egg cycle to adult lasts for 4-6 weeks depending on the species of lice.

Lice will die in a short time if they fall from the body of the host or body of the goat.

Lice eggs can not hatch at all if they fall from the body of the host or body of the goat.

This suggests that the lice population is higher in winter than in summer.

There are many products available on the market that can kill lice.

Eggs are not affected by lice medicine. So, the treatment should be repeated within a period of 10 to 14 days.

The goal is to kill nymphs before they grow into adulthood.

The best time to treat lice is during the summer months when the population of goat lice is low.

One alternative medicine to overcome goat louse is an 8% solution of Annona squamosa or A. Muricata seed and mixture of 0.5 kg of neem leaves (Melia azadirachta L), 1 kg of tobacco leaves, 0.5 kg of A. squamosa seeds with 0 , 5 liters of water.

Prevention should be done regularly so that the goat louse does not come back again.

Bathe regularly, Check periodically, Soak livestock or spray with cyper killer solution. But be careful not to be swallowed by the goat.

In addition, treatment can also use camphor.
The trick, puree mothballs and sprinkle on goat skin.

And do not forget to spray the cage with anti-lice drugs regularly.

If the difficulty in the above way, can use this one way:

Bathe with enough laundry soap. Can use rinso, soklin or the other.

Then add fastac (insectisida) 1/2 bottle cap per 5 liters of water. Avoid areas of eyes and mouth, drying goat which has been bathed to dry.

So the post about goat lice, may be useful.