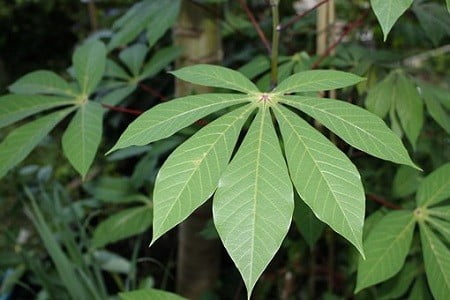 Cassava Leaf as a Concentrate As much as 40%

We want to be able to get quality feed ingredients at a very cheap price. Especially if the material is around us and the stock is very abundant.

Unfortunately, the feed ingredients which abundant and close to us, the quality is low. For example, rice straw and sugar cane leaves, water hyacinth and banana stems.

That feed ingredients is spread evenly in almost all region of Indonesia. However, its poor quality results in high costs to process it.

Once processed, the results are not so good too. It can only be used as a reserve feed during rare of rofage or only given as a feed mixture with very little amount.

If the number is small, this certainly does not provide substantial savings. Whereas, need additional power and cost to process it.

Cassava leaves are not like rice straw and friends above. I consider it different because it has a very good quality to be used as animal feed.

Although cassava leaves have weaknesses, it is easy to overcome. All this I have been doing is drying it and all this time all is well. 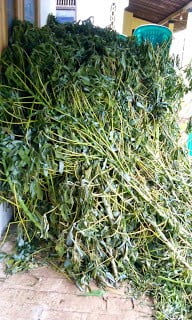 Cassava leaves in order to safe given to goats is when in dry conditions. Dry caused by sunlight or dried and wither by itself is same.

This dry giving is for the inexperienced and unaccustomed to using this leaf.

In addition, cassava leaves from “nyempel” that given to goats can also make it poisoned. 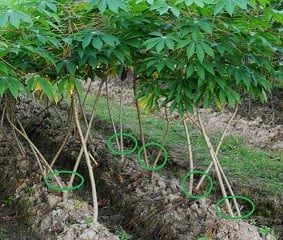 To make sure that there are only 2 stems that grow, then the plant checked one by one. This activity will be effective if done simultaneously with fertilizing.

Unnecessary trunks are taken and removed. This one is safe to give it to goat.

However, there are also some farmers who do not do this.

Thus, the browser can take the unnecessary part. Indeed, taking this excessive stem is largely not prohibited by its owner.

Unfortunately, when picking the stem after cassava is fertilized. This is what mostly causes poisoning to the livestock.

The characteristics of cassava that is fertilized is fresh green leaves and usually wider.

In addition, just after two days to a week after cassava is fertilized, there will be traces of fertilizer at the bottom close to the cassava stalk.

Regarding the complete characteristics of this cassava leaves, I have written it in the article below. If not read, please read first. Just click the link.

How to Safely Give Cassava Leaves to Goats

While the feed in the form of concentrate can accelerate the performance of livestock. However, the price is expensive.

If the cost of this concentrate can be suppressed, this is a good news. How to?

One way is to replace one of the ingredients of concentrate with a cheap and easy to get. Namely with cassava leaves.

There are several studies that discuss this. Later we will describe one by one. So, keep going reading it.

Silage cassava leaves can be used to replace concentrates by as much as 40%. And this has no negative effect on dairy goat etawah cross breed.

For example the price of concentrate per kg is 3000 rupiah, then we can save as much as 40 percent.

The use of cassava leaves is not limited to goats and sheep only.

Immediately, we describe one by one the results of the study. And we will see that the cassava leaves can actually be useful in livestock. 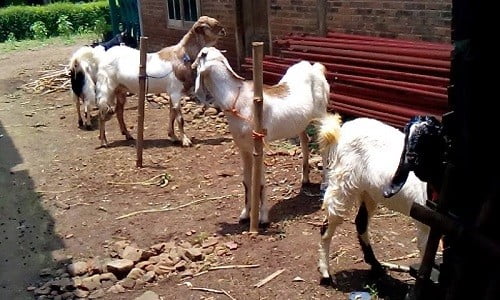 The ration consisting of 50% forage and 50% concentrate is a very good ration. Both in terms of quality and nutritional content.

With such rations, most likely the goats will provide a production that does not disappoint.

However, using the concentrate as much as half of the total ration was quite expensive. If the production (either increased body weight or milk production) does not cover, can muddle the financial condition.

One way to work around this is to replace some concentrates with similar quality other ingredients . One such ingredient is this cassava leaf.

The use of cassava leaves for the concentrate has been studied and the results are quite good.

Performance of livestock was not experiencing a negative development. Thus, the cassava leaf is safe and can be used as a concentrate.

Before being used as concentrate feed, cassava leaves are made in silage first. The trick is as follows:

1. Cassava leaves that consist of leaves, stems and young stems chopped into small size. About 2 cm.

2. Then shriveled in open space for 3 hours. Not exposed to direct sunlight.

3. After that, weigh how much.

4. Add and mix with 5% molasses. If the weight of cassava leaves, stems and stems as much as 10 kg then molasesnya as much as 0.5 kg.

5. The mixture is stored in a sealed container at room temperature for 4 weeks. Only then can only be given. Before given, aerated earlier.

As an information material, the forage used in this study is the king grass while the concentrate is a commercial concentrate.

For the desired results, I will explain only about the production of milk. Because the livestock used is a dairy goat.

How can we know if this cassava leaf can replace the concentrate? That is by feeding goats with different types of feed.

A group of livestock, given a ration that consists of king grass and concentrate. The amounts are 50% and 50% respectively.

If the total ration given as much as 10 kg, then the king grass 5 kg and concentrate 5 kg.

The second group was given rations of 50% king grass, 40% concentrate and 10% silaged cassava leaves.

By assuming same with the above paragraph, the amount of each ingredients is 5 kg, 4 kg and 1 kg.

The third group, given rations with 50% king grass, 30% concentrate and 20% silage cassava daung. Thus, the amount of each of these materials is 5 kg, 3 kg and 2 kg.

For four weeks, Etawah Crossbreed that fed with rations as above, the average milk production is as follows. 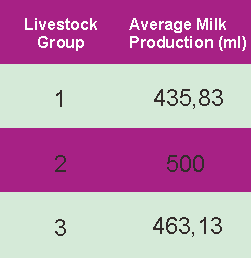 You can see the results in the table above.

The average milk production amount is slightly different. But the difference is not so significant.

In fact, with the addition of cassava leaves the average production of milk is higher.

Cassava leaves as a cricket concentrate 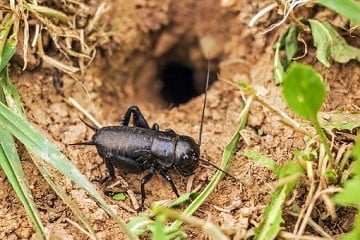 The increasing demand of crickets, then cultivation of crickets began to be done intensively. The hope is to get better and faster results.

Therefore, the feed given is required with a high nutritional content. Practical feed to meet these demands is by concentrate.

Typically, the feed that used as a concentrate for crickets is commercial chicken feed which has a crude protein content of between 20-22%.

However, if only given a concentrate merely, certainly incriminating production costs. Hence, it should be given a combination diet of forage.

This forage can be papaya leaves, mustard leaves, mulberry leaves, indigofera leaves, and cassava leaves. Depending on which type of forage is easy and inexpensive to get.

Of all the types of forages, which one is best for crickets?

Of course, the hope is the rapid growth of nymph and high egg productivity if the goal is to produce cricket eggs.

From some research studies, the forages I mentioned above have different effects on the target of crickets production.

There is a type of forage that is superior to other one. We will describe it one by one, so keep going to read.

Concentrate and cassava leaves for crickets [2]

Cassava leaves almost all of its parts can be used as cricket feed. The section includes the shoots of leaves or young leaves, old leaves and petiole.

However, for the newly hatched crickets, it is given 5 grams of concentrate and forage as much as 7.5 grams. The more days, the amount of gift is propagated because the weight of crickets increases.

For the phase of enlargement, ie from hatching eggs to young nymph, old or stalk is the same. That is, the development of the crickets is the same between the leaves given young, old or stalk.

To reproduce, crickets need a high protein intake. While the protein content between young cassava leaves, old and leaf stalks are different. The highest protein is in young leaves.

Therefore, the highest egg production is obtained on the concentrate and young cassava leaves. Egg production per head / day is as much as 0.022 grams.

The difference is quite significant. Productivity of cricket eggs that fed young cassava leaves is almost twice as many.

In terms of business, giving concentrate and young cassava leaves are also more profitable. Because to produce 1 gram of eggs, crickets fed the first ration needed only 1.876 grams of ration.

Unlike the second and third rations, each of which requires a ration of 5,363 grams and 2,996 grams to produce 1 gram of cricket eggs. 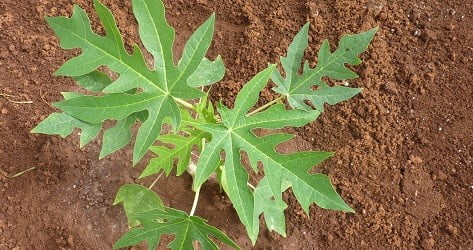 In addition to cassava leaves, the alternative forage that is good enough to feed crickets is papaya leaves. In between, each has advantages and disadvantages.

Cassava leaves have higher crude protein content than papaya leaves, but there are anti-nutritional substances called as cyanide acid (HCN).

Although papaya leaves have a lower protein content, but it has a very useful vitamin and enzyme.

From studies that have been done, the quality of cassava and papaya leaves is almost the same, except on one thing. Namely egg productivity and feed conversion.[3]

The crickets are equally fond of the two combinations of this type of forage. This is evidenced by the consumption of the same amount of rations.

Not only that, the quality of eggs produced is also almost the same. Long time hatching eggs and egg power produced, the quality is balanced.

But there is a distinguish that the amount of egg production produced, it turns out higher crickets are given concentrate rations and cassava leaves.

Not only that, with cassava leaves crickets need 0.03 grams of rations to produce one egg. While papaya leaves require 0.04 grams.

So, until here the winner is cassava leaves. Not only on the quality and production of eggs, but also on the stock or its availability. 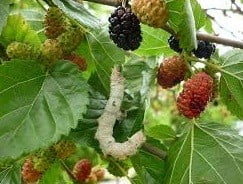 What if the mulberry or indigofera leaves are used as a cricket feed? Is better or not when compared with the leaves of cassava.

We both know that these mulberry and indigofera leaves have good nutritional qualities.

Apparently, crickets eat rations with unequal amounts. Rations with cassava leaves are most favored among the leaves of indigofera and mulberry leaves.

How to know if it’s liked?

The lowest consumption of rations is on rations with indigofera leaves then mulberry leaves. Rations with cassava leaves are the highest.

The number of different food consumptions, of course, results in the weight of the crickets. At week 4, crickets with indigofera rations average weight is 0.111 grams / head.

At week 8, the difference in weight is more noticeable.

Mustard Leaves vs Cassava Leaves to feed the crickets[5] 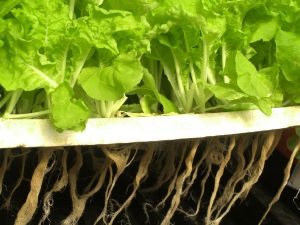 In terms of as cricket feed, Mustard’s leaves are of quality and the result is equivalent to cassava leaves. Of the parameters observed during the study, all showed similar or balanced results.

Starting from the level of ration consumption, egg productivity, body weight and others – all equal and balanced value. This is as Finito has observed.[5]

So, the alternative of cassava leaves to feed the crickets whose quality is comparable is this mustard leaf. However, there are several things to consider in terms of business.

Before that, the consideration is not less important is the issue of price or cost to get the forage.

We can estimate which cheaper between using cassava leaves or mustard leaves as a source of forage crickets.

I think, get here first this article. Hopefully the contents can be useful. Thank you and see you later in the article. 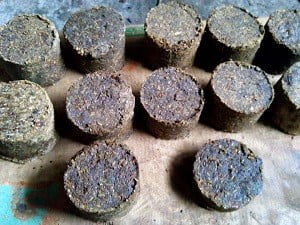