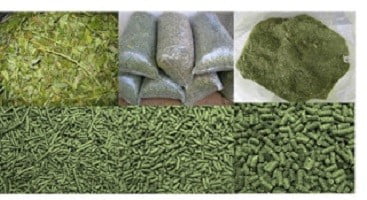 Indigofera for Goats – Make It as Hay, Mash and Pellets

Indigofera plants have many benefits that can be taken as goat feed.

This is because the nutritional content of the plant is very good. In addition, the planting is also not too difficult.

The development of indigofera leaves can be made into hay, flour and pellets.

If successful, this can overcome the classic problem of raising goats. That is about feed.

Feed in goat farms takes a large proportion in the whole process of animal husbandry production.

During the rainy season, the forage is abundant but because it is wet, it is easily moldy and rotten.

During the dry season, forage growth is less than optimal. It might not even grow.

Actually there are already methods used to store goat feed, such as silage.

Why are indigofera leaves?

In my opinion because indigofera leaves have high nutrition to be used as goat feed.

Indigofera can produce 51 tons of dry weight per year per hectare.

If you have a land area of ​​1000 square meters, then your land can produce indigofera leaves as much as 5.1 tons.

Germination rate of indigofera plants is also high, which is 90-94%.

So the number of dead seeds is 600 – 1000 seeds of indigofera. This is just a theory calculation, for encouragement. Facts in the field can be different.

Scientific data for indigofera leaf nutrition are as follows:

Total Nutrition that can be digested or TDN 76-79%. TDN value of that size is quite high.

There is a study that makes indigofera leaves into pellets, mash and hay.

His research was explained in great detail and clear. Starting from planting, maintenance, harvesting and making.

But I will start from the results first.

Feed products produced from this study are feed or concentrates of pellet-shaped indigofera leaves.

After the leaves are harvested, then dried, tapped and then printed into pellets. 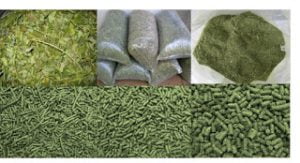 From the picture above it can be seen that the process of making indigofera leaves into pellets is like this.

The leaves are dried, then packed in plastic and stored, milled or tapped and then printed into pellets.

Drying it with sunlight which is around 29-30 degrees Celsius.

The figure above is a graph of the time and amount of water content of the indigofera leaves from each drying treatment.

Drying is the fastest done with sunlight and oven at 70 degrees Celsius.

It can be seen from the graph that the first 1-2 hours of drying, the amount of water content immediately drops to below 30%.

All drying processes stop at ± 25% moisture content (estimated from the table) except with sunlight showing the end result of the water content is slightly higher than the others. 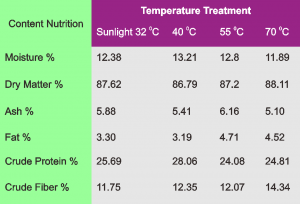 The picture above is a table picture between temperature treatment and nutrient content from dry matter, ash, fat, crude protein and crude fiber.

So the temporary conclusion, the best nutrition from making indigofera leaf pellets with drying temperature of 70 0C.

But if you look closely, if you want to make your own indigofera leaf pellets and do not have an oven, you can use drying with sunlight.

How to plant indigofera seeds

Before planting, indigofera seeds are planted first. It seems that it takes around 40 days for indigofera plants to be ready to be moved to the ground.

After the plants are ready to be moved, the spacing between plants is 1.5 meters x 1 meter.

Besides using the above fertilizer, liquid fertilizer is also used for the leaves.

The ingredients contained in the leaf fertilizer are as follows.

Thus, the harvest period is every 60 days.

Somewhat scary, but the meaning is as follows.

Since the seeds are planted, leaf fertilizer is sprayed on the 30th, 34th, 38th and 42nd days.

After that, the first harvest is carried out on the 60th day.

From the first harvest, leaf spraying was carried out again after the 30th, 34th, 38th and 42nd days of the harvest or first pruning of the indigofera leaves.

After that is the second harvest.

Leaf spraying is carried out again after the 30th, 34th, 38th and 42nd days. It is calculated from the second harvest or pruning.

Because of this research, it’s good for me to say that the cultivation of indigofera is made with plots.

Some plots are not sprayed with leaf fertilizer.

The results of the plot that is not sprayed are used as benchmarks or comparisons of plots sprayed with leaf fertilizer.

The dose of spraying was also distinguished.

Each data will be taken later, compared to which is the best result and the most production.

Now is the result of the spraying as follows: 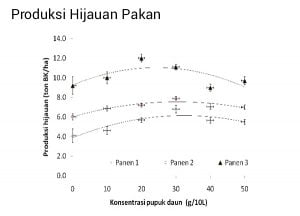 The figure above is a graph of the relationship between leaf fertilizer concentration and the amount of forage production of indigofera leaves in dry weight.

Indigofera leaves are not sprayed

For Indigofera leaves that are not sprayed, the amount of green obtained is 4 tons of dry weight per hectare during the first harvest.

The yield of indigofera leaves increases at the second and third harvests.

It makes sense because after the branch of a plant is pruned, it will produce new branches whose numbers are usually more than pruned branches.

So the number of indigofera leaves produced is definitely more.

The amount can be seen in the table above. Interestingly, the highest number of indigofera leaf harvests was obtained from 20 g / 10L fertilizer amounting to 12 tons of dry weight per hectare.

The amount of fertilizer that is too thick, is likely to make the leaves become too fertile. Fertile leaves the size of the leaves is usually wider than the others.

Because it is wider, the leaves will cover or shade the leaves below. Shaded leaves do not get maximum sunlight, because they are covered with leaves above them.

Finally photosynthesis of the leaves is less than optimal. This is my analysis, it can be true it can also be wrong, hehe …

Ok That’s enough for this article. Thanks for reading. 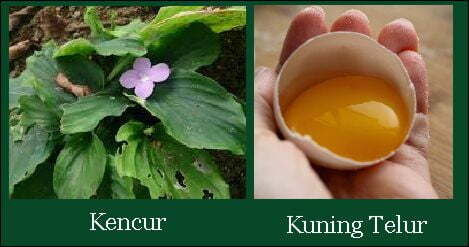